Reasons for the changing economic structure of the UK 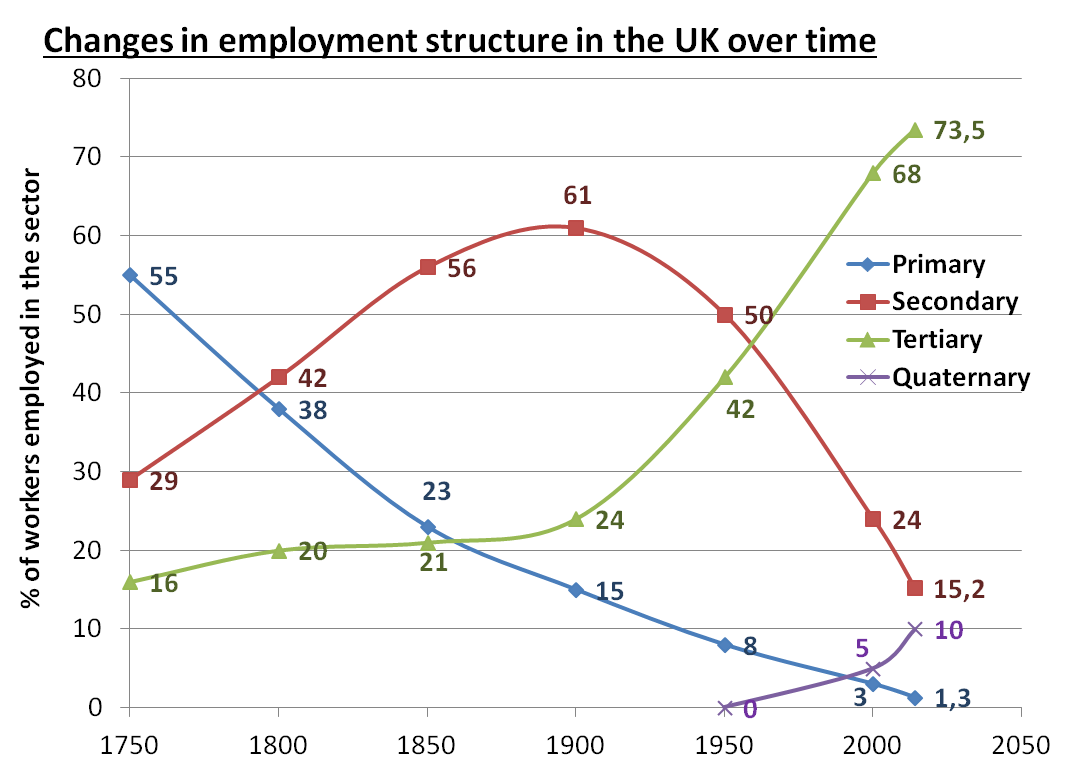 The economy of the UK has changed dramatically over time. The graph above shows that over time;

1. Primary industries have declined rapidly
2. Secondary industries experienced a period of growth during the industrial revolution and has been in decline since the turn of WWII
3. The service industries have grown massively in importance  and is the dominant industry in the UK economy today
4. A new sector of industries, the quaternary industries in which research and development takes place, has emerged and is growing rapidly.

These reasons for these changes in the UK are complex and will affect which job you eventually get!  Many of the reasons are because of globalisation, deindustrialisation and government policies.


Globalisation is the process which has created a more connected world, with increases in the movements of goods (trade) and people (migration & tourism) worldwide. This process has had a big impact on the way in which the UK’s economy works.

For example, many factories in the UK have shut down and production has continued in low income countries, which have less educated workforces, limited health and safety or no minimum wage laws.  This makes costs cheaper. In addition, manufacturing industries in the UK are less productive than in other countries. Newly Emerging Economies like China opened their countries to global business in the 1980s and many UK firms chose to move there.
In addition, the UK has a highly educated workforce who can work in global industries. In 2013 nearly 50% of young people in the UK entered university, and results in a very high demand and high aspirations for graduate level jobs often in services and the quaternary sector.


Deindustrialisation is the decline of a country's traditional manufacturing industry due to exhaustion of raw materials, loss of markets and competition from NEEs. This means it is tied in with globalisation. One of the causes of deindustrialisation is mechanisation (the use of machines). As this has taken place businesses and farms began to replace many workers for machines as they are generally more reliable and cheaper to run. In addition, many of the UK’s secondary industries like armaments manufacture and coal heavily polluted the environment. As the UK and EU have very strict laws for environmental pollution for businesses, this makes it expensive to make products here.


Government Policy is a plan or course of action decided by a government to manage issues in a country. This has also resulted in a change in the types of jobs people do in the UK. For example;
• Some primary industries have declined because of laws and treaties – fishing is limited by quotas imposed by the European Union. Policies limiting fishing and helping farmers mechanise cost jobs in primary industries.
• The UK Government in the 1970s and 1980s sold or turned many of its secondary and primary industries to companies in a process called privatisation.  This cost many jobs in steel making and coal in particular.
• Many UK governments have invested in the “knowledge economy” rather than primary and secondary industries

There are other reasons, for example some resources such as iron ore and coal have declined in availability in the UK or become uneconomic to mine, so employment declined. Economic reasons are also very important; the average annual wage of a farmer in the UK is £9000 or less, making this an unlikely occupation for a highly educated skilled workforce.

NEXT TOPIC - UK - impacts industry on the physical environment