• Intermediate technology (or appropriate technology) – Technology that is suited to the needs, skills, knowledge and wealth of local people in the environment which they live.
• Over-cultivation – Exhausting the soil by over-cropping the land.
• Overgrazing – Grazing too many livestock for too long on the land, so it is unable to recover its vegetation.
• Soil erosion – Removal of topsoil faster than it can be replaced, due to natural (water and wind action), animal, and human activity.
• Subsistence farming – A type of agriculture producing food and materials for the benefit only of the farmer and his family.

The causes of desertification

Desertification is the process by which land becomes drier and degraded, as a result of climate change or human activities, or both.
It is caused by a mixture of climate change and the issues raised by population pressure.  As population increases they increase the numbers of animals they keep, such as goats, which eat more vegetation. They also farm the land more intensively, which extracts nutrients and removes the natural vegetation. People also collect more firewood to keep warm at night or for cooking.  In addition, Climate change is making temperatures hotter and rainfall less reliable and more variable. All of these things reduce the amount of natural vegetation. There are no plants or leaves to intercept rain and soil is left exposed to hot sun so the sun bakes the soil and it cracks. When it rains, the rainwater runs over the surface of the soil rather than soaking in which means that soil can often be washed away. This means that the soil is degraded; losing fertility and structure. This completes the cycle, as even less vegetation can be supported and the environment declines further. 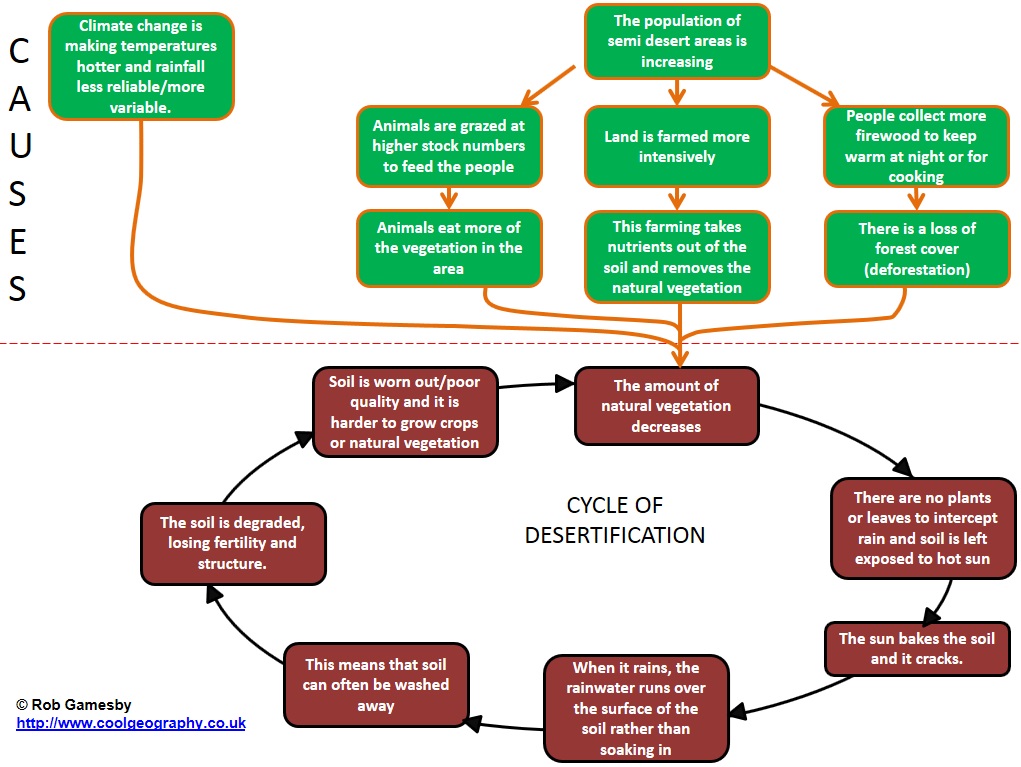 The effects of desertification
Desertification is a serious issue that affects over 1 billion people around the world. It can have a damaging impact on both people and the natural environment. In 2014 the UN stated that 20million people in the Sahel region of Africa faced hunger and required $2 billion in food aid due to desertification.
The loss of vegetation can cause severe soil erosion. The nutrients in the soil get washed or leached away leaving soil infertile. The loss of vegetation also means that there has been damage to animal’s habitats. In addition, loss of species affects the availability of local medicines.  Population pressure has also stopped people moving animals from place to place as they traditionally did and using settled agriculture. This settled agriculture means that people farm too intensively which also drains the soil of its nutrients. This leaves the soil of poor quality where nothing can grow. This leads to regular crop failure. People also draw more water out of the soil for irrigation.  Together with the drying of the soil this leaves deposits of salt (Salinisation) and means crops can’t be planted.  Lack of food and water can also mean farmed species such as cattle can die of starvation.
People have to migrate out of these desertified areas and often end up in shanty towns at the edge of big cities or in refugee camps.  Food aid can be flown in but people can become reliant upon this. However, famines do happen and 250,000 people died in the Sahel drought of 1968 to 73. Desertification also means there are less tree cover and more grasses, which protect the soil less. 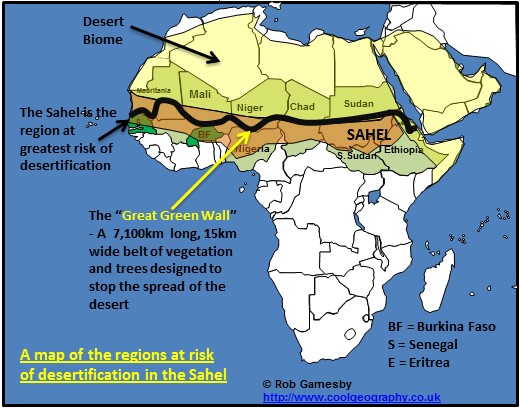