A case study of a hot desert - the Thar Desert


The Thar Desert is the world's seventh largest desert. It is a hostile environment that lies to the west of New Delhi and includes the deserts that cover portions of the Indian states of Gujarat, Punjab and Rajasthan, as well as the Punjab and Sind in Pakistan. Indeed, the desert straddles the border between India and Pakistan and covers over 200,000km squared. On its western margin lies the mighty Indus River.
The Thar Desert is not empty of human or plant life, it has some trees and animal life, and it has been colonised for a long time.  It is known as the land of death, but hosts a variety of life.  It is the most populated desert in the world with nearly 30 million people and is also the most densely populated with 83 people per km2, it is known as the “teeming” desert. It is an environment with many opportunities and challenges to development. 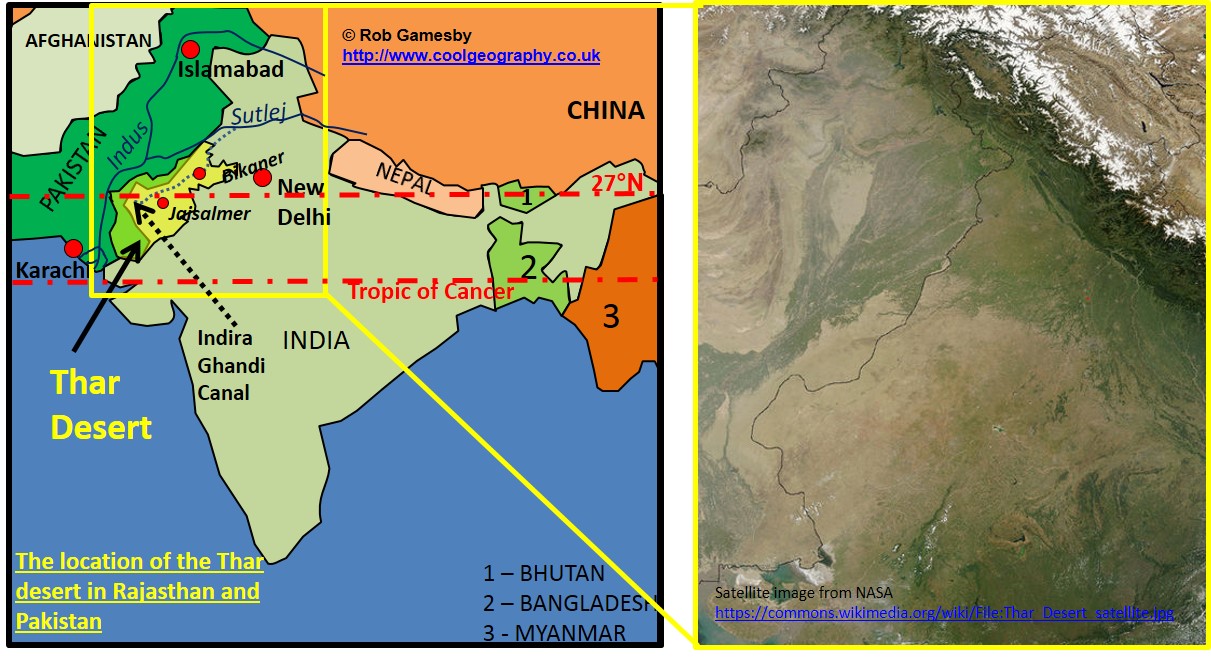 Above - the location of the Thar Desert

Tourism
Jaisalmer is a desert city that has stood the test of time for nearly a thousand years.  It sits on an ancient trading highway between east and west, on the silk and spice routes. The population has waxed and waned with changes in trade and drought.  Recent times have seen the population grow by a third, as its booming tourist industry sucks people in.  More than 600,000 people now call the area home. The city is struggling to keep up, especially in terms of water use.  The fort gives the town its name, the golden city. The demand for water into the fort has gone up 12 fold, and the waste water passes under the foundations and undermines them.  The walls are subsiding and crumbling. People are coming as tourists because of its large fort, the history of the Maharajahs and because Jaisalmer is often used as a base to explore the nearby desert, in jeeps or by camel safari.
Even the fort is struggling due to increased tourism. Originally the fort relied upon wells, but water was piped in in the 1970s. They failed to put in proper drainage with the water and it is now at risk of collapsing in parts.  Many tourist hotels are in the fort and this adds to the problem. 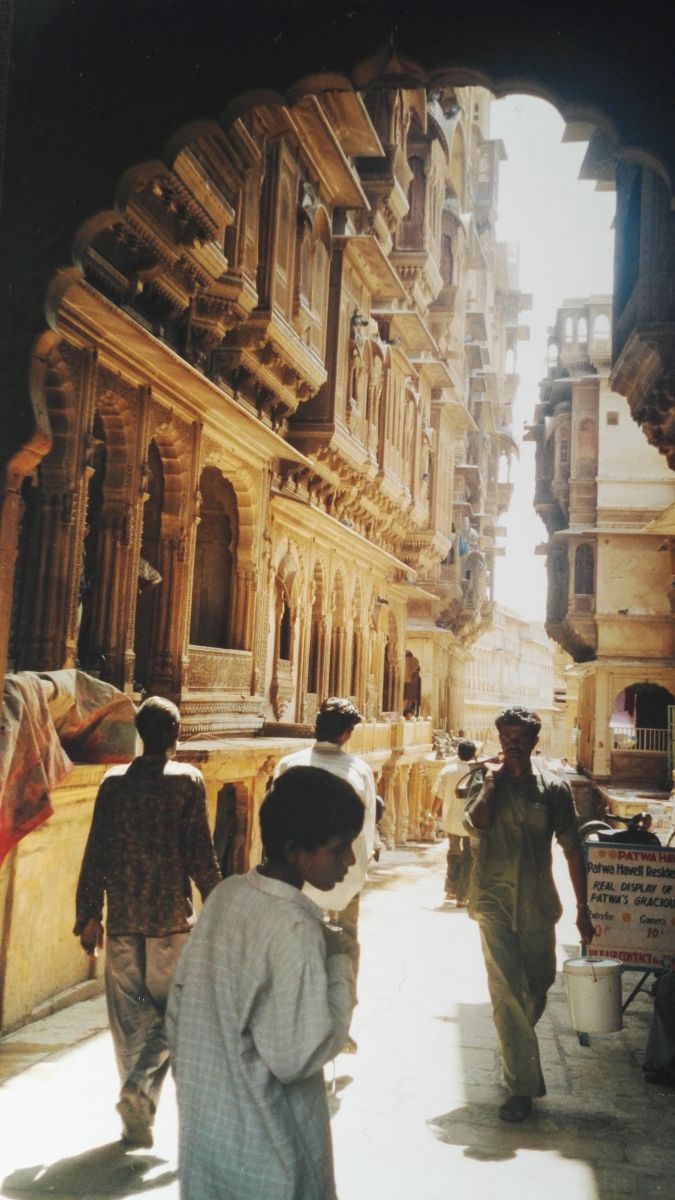 
Many of the people who live in the Thar Desert are involved in farming, but this is tough. The landscape has creeping dunes, harsh winds, searing summer temperatures and devastating droughts.
To combat this many of the people are subsistence farmers, farming enough food for themselves and their families with little for sale. There are depressions between the sand dunes that act as mini drainage basins.  When it does rain the water collects at the bottom of these depressions and allows desert grasses to grow.  This allows the animals to graze and people to live here in small settlements like Pithorai. People survive here by herding goats and women play an integral role in village life whilst the men are away with the animals.  They have to fetch water twice a day.  The houses are small and dark inside to keep cool in summer and warm in winter. The way of life is self-sufficient and the goats provide milk for the villagers. The women cook with butter milk as it saves water; similarly they do the washing up with sand! The women also have to collect firewood. Another group of farmers, the Raikas, are subsistence farmers who look after camels. 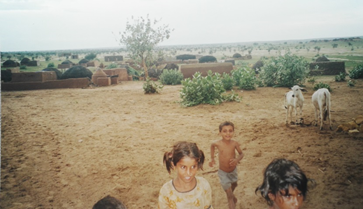 Commercial farming
The desert biome is under threat from commercial farming.  A huge canal has been constructed from the River Sutlej across the desert. Initially it was 143km long but was extended as the Indira Ghandi canal.  This brings water to major cities such as Bikaner and Jaisalmer, but also water to irrigate the land.  The desert area now produces crops like cotton and wheat, which can grow in these areas with the additional water. The land is being fenced off and used for more intensive agriculture.  Sprinkler systems are irrigating fields once grazed by animals. 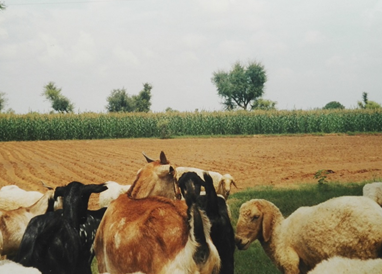 Commercial farming in the Thar Desert


Mineral extraction is the removal of solid mineral resources from the earth. In Rajasthan these resources include limestone and gypsum (for making plaster) are found in this desert - and are valuable for the building industry.
Energy use
The desert is also used to generate energy.  Close to Jaisalmer is the largest wind turbine farm in India. It consists of 75 wind turbines with a total capacity of 60 MW. The project provides renewable electricity to the Northern regional electricity grid.  There are also plans to develop a huge solar farm across large parts of the desert. 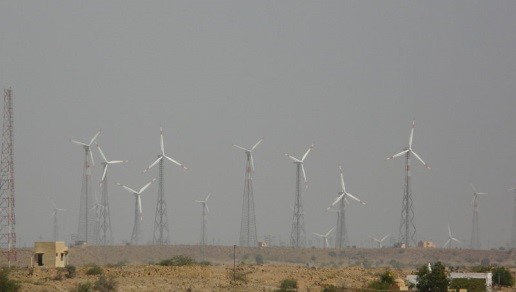 
Despite all of the opportunities the Thar Desert still poses huge challenges in terms of developing a hot desert environment.  The extreme temperatures, poor water supply in parts of the desert, and inaccessibility in more remote regions all threaten the lives and well-being of the people who live there.