London is an amazing city and it offers a huge range of OPPORTUNITIES to the people who live there or migrate there.

Social and Economic Opportunities:
OPPORTUNITY 1 - Cultural mix
The cultural mix or multiculturalism basically refers to a country or place that has more than one culture living together in close proximity.  Multiculturalism is an issue in many HICs and can be viewed in both a positive light and as something that can pose problems that need careful management.
The increasing interconnections of our world and the ever moving populations of our planet via migration mean that most cities like London around the globe especially in HICs have huge numbers of people of all different races, religions and cultures
The UK has huge numbers of cultures and races, as well as white British people there are huge numbers of migrants from India, Pakistan, Bangladesh, Canada, USA, Kenya, Zimbabwe and other ex-British colonies.  In addition, there are also lots of people from Europe and countries outside of the ex-colonies and the European Union.  In addition, many of the "newer" cultures to the UK are not actually that new at all!  Jamaicans and other peoples from the Western Caribbean have lived in the UK for many generations, and many Asian peoples who migrated here now have 3rd and 4th generation families living in the UK.

LONDON:
The Census of 2011 revealed that;
1. London is one of the most diverse places not just in Britain but on planet Earth;
2. In three boroughs - Newham, Brent and Tower Hamlets - white people are now in the minority.
3. Inner London has the highest non-white population in the country, with 37 per cent of residents from an ethnic minority. In outer London, the figure falls slightly to 27 per cent.
4. London is more diverse than any other part of the country; with the only other area to record a figure in excess of 20 per cent is the West Midlands.
ADVANTAGES
This migration and multiculturalism has been advantageous for London.  It enriches huge areas of London cultural life, from the amazing array of food that is available on nearly every high street in London to the music variety we have (the BBC's Asian Radio channel is a great example of this).  Other advantages include the great exposure people get to other religions, languages and cultural parties.  The London also benefits from huge cultural events celebrating this multiculturalism, such as the Notting Hill Carnival.  The cultural mix in London also highlights what a broadly tolerant and Liberal people the citizens of the London are - a fine compliment.
CHALLENGES
A cultural mix is not without its difficulties.  One of the big issues for London and other parts of the UK is INTEGRATION.  How can we ensure that all new peoples moving to London and other parts of the UK can converse properly in English, mix with other groups and have access to all of the advantages of being a UK subject.  Another issue is ghettoes, how can we prevent economically poorer cultural groups living in the poorest parts of our cities.  Language is another issue, and many public services such as schools and hospitals have to provide language translation services.

Visit the London Data Store for more on this.

OPPORTUNITY 3 - Employment.
The graph shows that the economy of London is different to that of the rest of the UK.  It is dominated by financial and insurance activities, mainly located in the City of London.  Overall;
• Productivity in London is 40% higher than the UK average
• London’s average GVA per job is £77,125, compared to UK average of £54,300 (2019)
• London was responsible for 46 per cent of the total UK GVA from the financial and insurance activities sector.
• London houses a major world financial centre and a range of business specialisms which attract a highly skilled workforce.
• London residents (aged 16 to 64 and working) are more likely to be employed in managerial, professional or associate professional and technical occupations, compared with the UK (54 and 43 per cent respectively in 2011).
• The total London workforce was just under 5.2 million people in 2017 (including 682,300 were born in other EU countries and 1.3 million were born elsewhere in the world).
• However the unemployment rate was one of the highest. London’s unemployment was 7.6% in June 2020 compared to 6.3% nationally 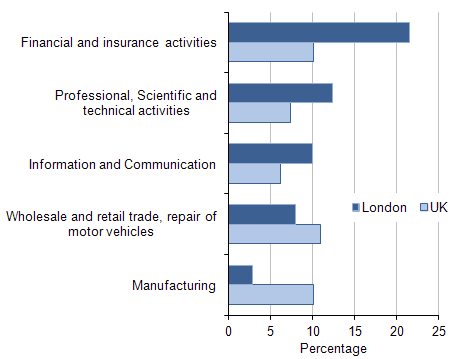 OPPORTUNITY 4 - Integrated transport systems
London has a really developed INTEGRATED transport system.  Integrated transport means that all of the different forms of transport can link to one another.  Its transport network includes both private and public services. Public transport accounts for 25% of London's journeys.
London also serves a public transport network hub for the whole of the UK –many UK motorways converge on London’s orbital ring road the M25, Heathrow, Gatwick and Stansted serve as major hub International air ports, busses congregate here and trains link the UK together at stations like Kings Cross and connect to Europe via Eurostar from St Pancras. 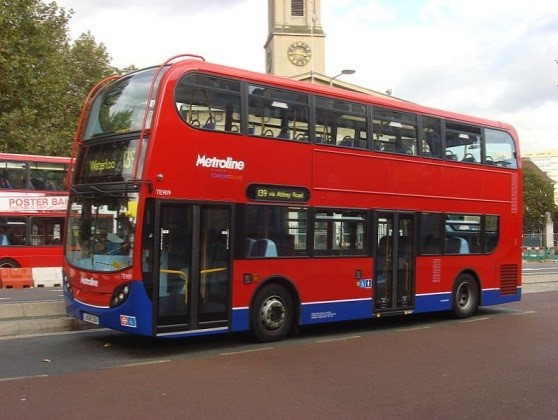 London bus by Oxyman (Own work)  via Wikimedia Commons


Transport for London controls the majority of transport in London including the London  Underground, the iconic red London Buses, the Docklands Light Railway, and  the London Over ground.
London Commuters can travel on most forms of transport using the electronic contactless card payments or the Oyster card. This makes paying for transport easier.

London also has an integrated cycle network, it is estimated that over one million Londoners own bicycles and cycle rates are increasing, with 2.5 per cent of all journeys in London made by bike.

OPPORTUNITY 5 - Environmental: urban greening
Urban greening means to increase the amount and proportion of green spaces within a city.  These green spaces are essential for people’s quality of life.  London has made attempts to offer lots of green spaces within its urban area by;
1. Creating ROOFTOP green spaces - the Greater London Authority have produced a green roof map of around 700 green roofs in central London alone, covering an area of over 175,000m2. That’s 17.5 hectares or around 25 football pitches! These roofs are used as living spaces and spaces to grow plants. 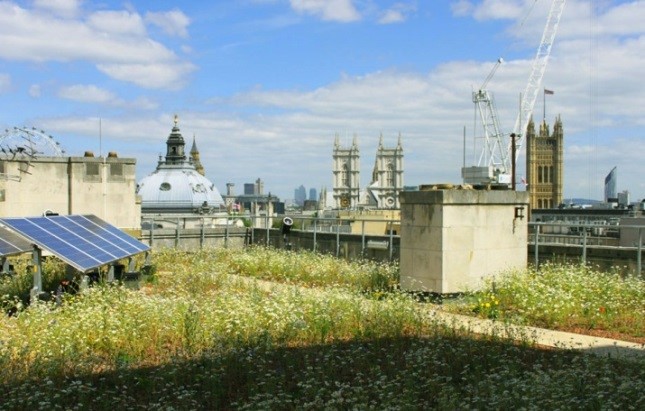 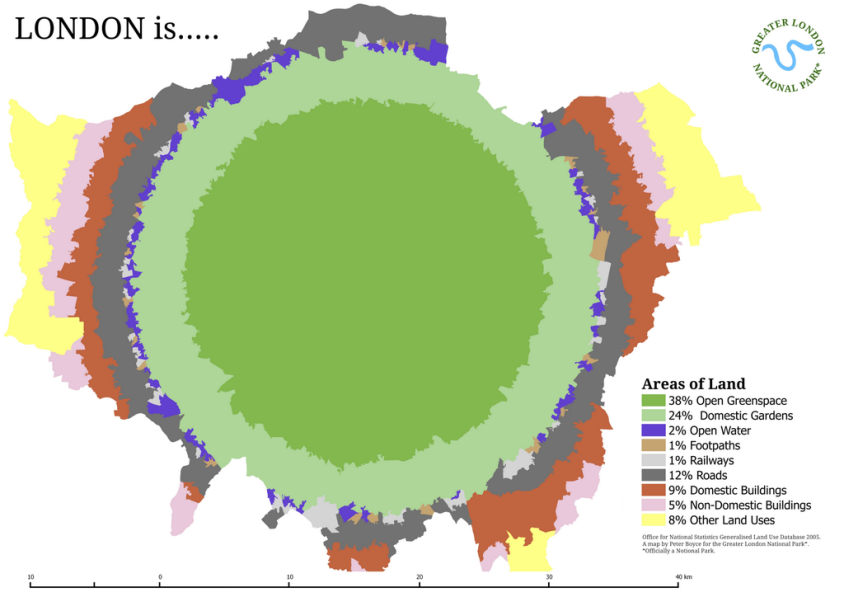