Natural causes;
Volcanic activity
Volcanic activity can reduce global temperatures because of the dust and ash that goes into the atmosphere and sulphur dioxide that creates aerosols.  These volcanic materials reflect incoming radiation back out to space cooling the Earth.  The Mount Pinatubo eruption of 1991 resulted in cooling of 0.4oC.
Sunspots
Sunspots are storms on the sun’s surface that are marked by intense magnetic activity and play host to solar flares and hot gassy ejections from the sun. Increased sunspot activity has been noted at times of increased temperatures, and decreased activity in cooler times.

Variations in the way the Earth orbits the sun over time,
The Earth’s journey around the sun changes slowly over time, it does three things that sound like a dance – stretch, tilt and wobble!

The Earth’s orbit slowly changes from elliptical to circular and back again over a 95,000 year period.  Circular orbits favour glacials, elliptical orbits favour interglacials as the Earth passes closer to the sun allowing for more melting 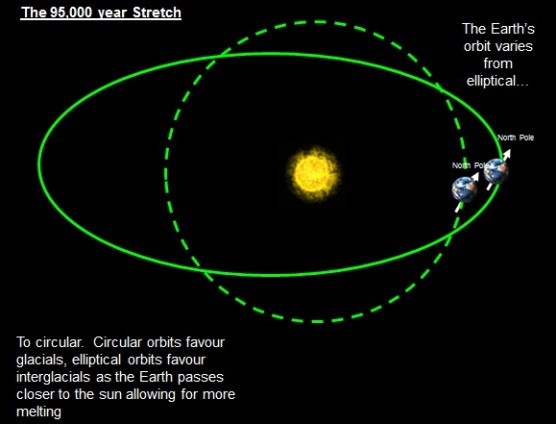 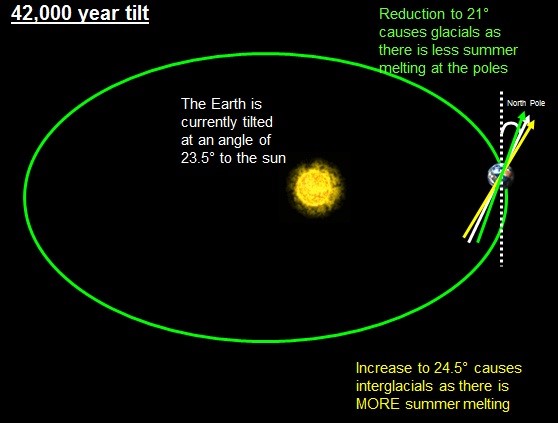 The Earth wobbles on its axis every 21,000 years meaning that the seasons change for the 2 hemispheres. At present our orbit puts N-Hemisphere closest to the sun in winter and furthest in summer – ideal for glaciers to develop. It was the reverse 12,000 years ago and caused the current interglacial 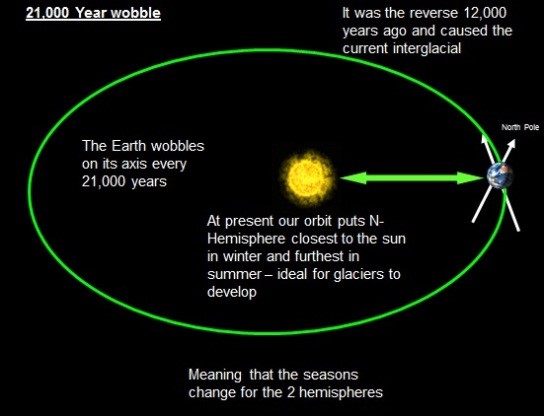 Human causes
Fossil Fuels
We use fossil fuels (including coal, oil and gas) in power stations across the world to generate energy.
Coal is the remains of ancient plants and trees that grew over 200 millions of years ago. Oil and gas is made up of the remains of microscopic plankton. Over millions of years these remains become the carbon-rich coal, oil and gas we can use as fuel.
When fossil fuels are burned they release carbon dioxide into the atmosphere which contributes to global warming. Using fossil fuels to generate energy also releases pollutants into the atmosphere - such as sulphur dioxide. 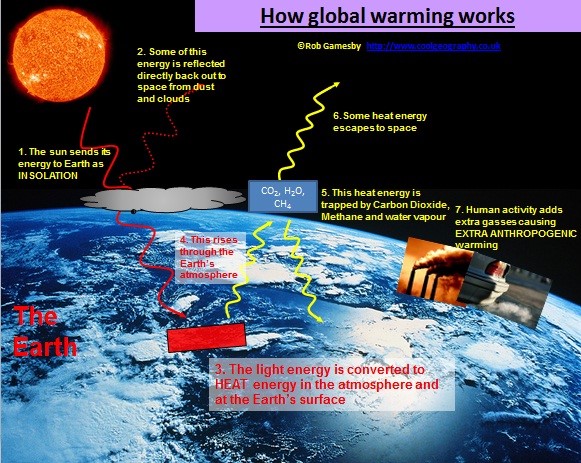 Deforestation
Forests have a vital role to play in the fight against global warming. Forests absorb and store carbon in their trees and soil. But if forests are cleared or disturbed, this carbon is released as carbon dioxide and other greenhouse gases. Up to a fifth of global greenhouse gas emissions come from deforestation and forest degradation.