The Philippines consists of a group of islands in the South China Sea. The country regularly suffers from large typhoons that move in from the south west every year during the tropical storm season. This case study is about Typhoon Haiyan, which is unofficially the fourth most intense tropical cyclone ever observed. 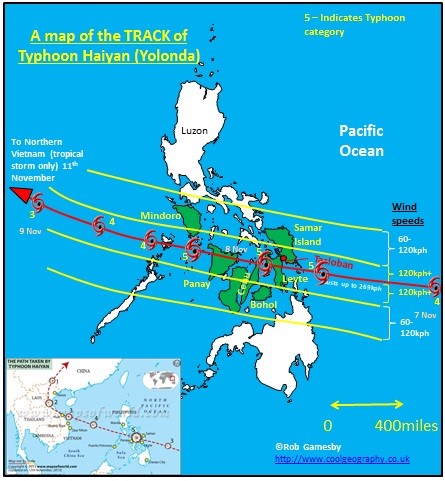 Facts about the Philippines & UK (from CIA Fact book 2014)


The Philippines sits in an area of seasonally warm ocean water (sea temperatures over 27°C) and has enough Coriolis Force to create rotating winds over the ocean's surface.
Sea-level rise is happening globally but is particularly affecting the Philippines. It is caused by global warming and has gone up by about 20cm since 1900. These sea level rises create larger storm surges.
Use of groundwater has caused parts of the country to sink.
The worst affected city, Tacloban, is at the end of a bay that funnelled water from the storm surge. 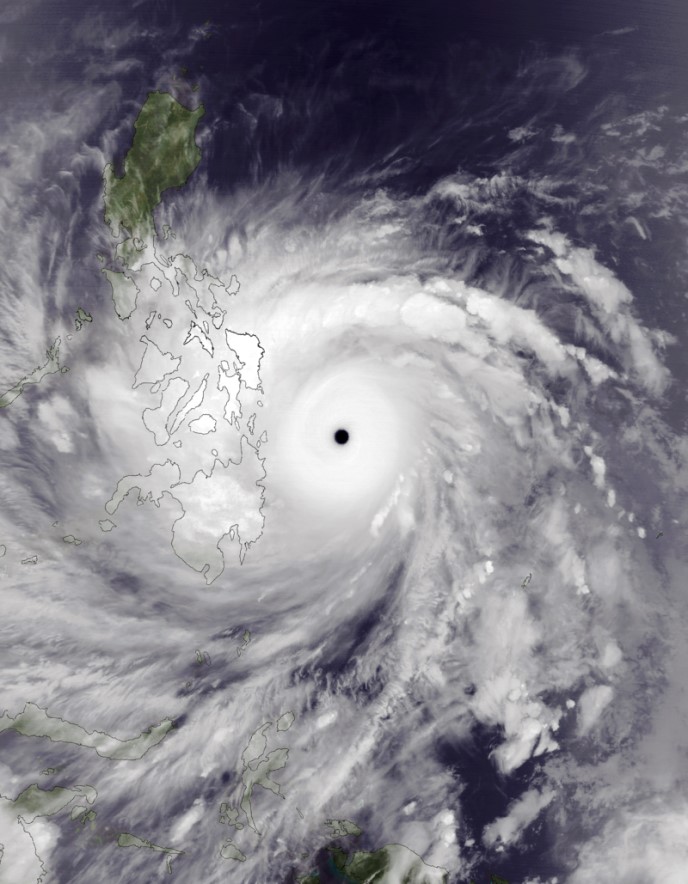 Timeline of development;
• 2nd November 2013 – Typhoon Haiyan starts as an area of low pressure several hundred kilometers east-southeast of Pohnpei in the Federated States of Micronesia.
• 3rd November – moves west and develops into a tropical depression
• 4th November - Haiyan becomes a tropical storm
• 5th November -  the system began a period of rapid intensification that brought it to typhoon intensity.
• 7th November  - Typhoon Haiyan made landfall in  Guiuan, Eastern Samar
• 10th to 11th of November - Haiyan reaches Vietnam and weakens in intensity
Impacts
Quick facts according to the Disasters and Emergency Committee of the UK
• Typhoon Haiyan - known locally as Yolanda - hit eastern Samar Island at 8.40pm GMT on 7 November 2013 (4.40am 8th November local time).
• It caused a storm surge – a wall of water – that was 25 feet high in some areas, including in the town of Tacloban.
• Over 14 million people were affected across 46 provinces.
• The city of Tacloban, home to more than 220,000 people, suffered more loss of life than any other area of the Philippines.
• Five million people saw their homes severely damaged or destroyed (550,000 houses destroyed and an additional 580,000 houses were severely damaged). 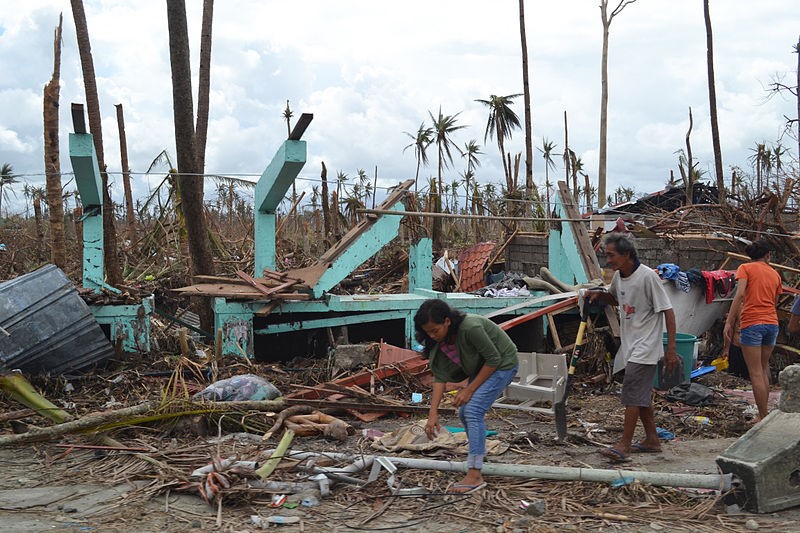 Devastation in Tacloban
By Trocaire from Ireland (DSC_0749)


Typhoon Haiyan is one of the most devastating storms of recent history. It killed approximately 7400 people (6,340 confirmed, 1,061 missing) and affected 9 million people. Immediately after the storm the Philippines faced a humanitarian crisis after the Visayas Islands in the central part of the country had 1.9 million homeless and more than 6,000,000 displaced.
The economy was affected, with estimated losses at $2.9billion with much of this in agriculture.  The major rice and sugar producing areas for the Philippines were destroyed. A total of 131,611 tons of rice was lost (Food and Agriculture Organisation (FAO)), together with much of the coconut crop which is nearly half the Philippines agricultural exports (the country is the world’s biggest producer of coconut oil).  5.9 million Workers lost income sources according to USAID. Tacloban airport terminal building was also completely destroyed by a 5m storm surge.
The United Nations feared the possibility of the spread of disease is high due to the lack of food, water, shelter, and medication. In addition, casualties were reported as a result of the lack of aid in affected areas.  Socially people were affected; they became refugees in lass affected areas and migrated there.  Also, fishing communities were affected with the storm destroying boats and associated equipment.
The natural environment was also affected, with loss of forests, trees and widespread flooding. Local ecosystems were also affected by sewage leaking from overwhelmed sewage systems and oil leaks. A lack of sanitation in days following the event also leads to a higher level of pollution.


Management & responses
The government was criticised for its slow response to this event. However, the Philippines formally declared "A State of National Calamity" and asked for international help; one day after the Haiyan hit the country.  A week after the typhoon had struck President Benigno Aquino was under growing pressure to speed up the distribution of networks or food, water and medicine to desperate survivors and to get paralysed local governments functioning. However, the storm damaged infrastructure making response difficult.  For example, the Tacloban city government was decimated, with just 70 workers in the immediate days after the disaster compared to 2,500 normally. Many were killed, injured, lost family or were simply too traumatised to work. 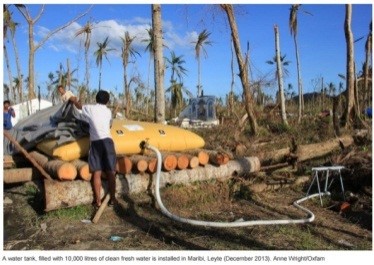 By December, water tanks had been installed by charities like Oxfam but not in all areas.
6 Months later, many people still had limited access to shelter and water.  NGOs like the International Red cross were trying to provide adequate settlements, fresh water access and access to jobs/livelihood.
The Philippines authorities have invested in disaster risk reduction (DRR) and climate change adaptation (CCA). They spent $624m on this in 2011 – two per cent of the national budget and 0.28 per cent of GDP – while at least five per cent of a local authority's revenue is set aside for its Local Disaster Risk Reduction Management Fund