Key words
Extreme weather - This is when a weather event is significantly different from the average or usual weather pattern, and is especially severe or unseasonal. This may take place over one day or a period of time.
Immediate responses - The reaction of people as the disaster happens and in the immediate aftermath.
Long term responses - Later reactions that occur in the weeks, months and years after the event.

The St. Jude storm was a huge LOW PRESSURE DEPRESSION that struck the UK between 27th and 28th of October 2013 before going on to affect other parts of Northwest Europe.  It caused 17 deaths across Europe and was also known as Cyclone Christian.

Causes
1. The storm started as a depression forming off the east coast of the United States in the North Atlantic along the Polar Front, the boundary between warm and cold air.
2. It headed east helped by a strong jet stream, a high up ribbon of fast moving air circling the globe in a West east direction.
3. As the storm moved east it passed by the remnants of ex-tropical storm which added extra warm air and energy to the storm.
4. This, together with a strong jet stream, led to a rapid deepening of the St. Jude low before it hit the UK then Western Europe as a strengthening storm.
5. The storm system was swept across the Atlantic at a rapid pace moving eastwards with an average speed of 77 km/h (48 mph),
Storm facts
1. It crossed over 2000 km (1240miles) in less than 26 hours.
2. Pressure were very low, reaching in the UK
3. The storm got worse over the North Sea and pressure dropped to 965Mb in Denmark which also suffered its fastest ever recorded winds of 120.8mph
4. Winds were enhanced by a sting jet – where cooled air rapidly descends from the upper atmosphere

Forecasting
The Met Office predicted the passage of the storm with a good degree of accuracy which contrasts to the famous “hurricane” of 87 when they got the forecast wrong.
It was forecast in the week before it occurred using a supercomputer.  On the 24th of October warnings were given that the south coast would be affected. Later, it was forecast that the storm would pass over the United Kingdom on a more northerly track, affecting all areas south of the Midlands.
Predictions were for 20–40 mm (0.6–1.2 in) of rain, with wind speeds of 80 miles per hour (130 km/h) falling in a period of six to nine hours. These were later updated, with winds of Force 11 (a violent storm of 102.4–117.4 km/h) predicted.
The Met Office issued weather warnings for the affected areas including "Yellow – be aware" warnings
Ahead of the storm, London's Metropolitan Police Service advised people to only use the 999 emergency telephone number in an emergency, and to use the 101 Single Non-Emergency Number service for reporting non-emergency situations, anticipating the emergency services being stretched by the storm's passage. 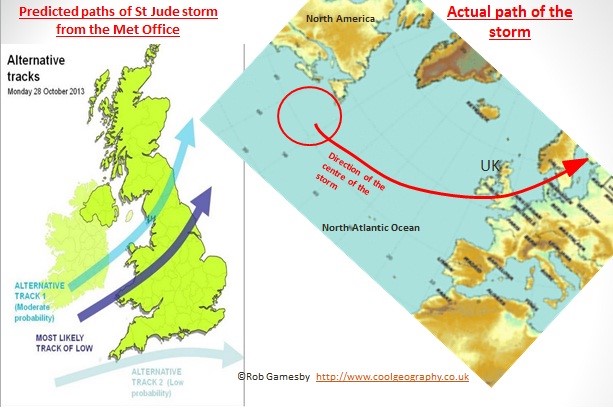 Impacts
• The storm had lots of impacts after it finally reached the UK early on the 28th of October. There were very fast winds, a gust of 99 miles per hour (159 km/h) was recorded at The Needles Battery, Isle of Wight.
• The environment was badly affected in the UK, with trees being brought down by the wind as many had still not yet dropped their leaves so had a larger surface area to be affected by the wind. These trees fell onto buildings, cars and power lines.
• Overall structural damage to residential and commercial buildings was limited in the United Kingdom, with most damage to roofs, cladding and glazing. A helter-skelter was blown over in Clacton, cranes collapsed in London and construction sites had to close down for the day.
• There were unfortunately casualties, in London, two people were killed when a gas explosion destroyed three houses and damaged two after the storm blew a tree down. A 14-year-old boy was swept out to sea and never found, whilst a man died in Watford when a tree fell on his car. A 17 year old girl died in Kent after the storm blew a tree onto the static caravan in which she was living.
• A double-decker bus with two passengers on board was blown over and in Devon a wind turbine was blown over.
• Major disruption was caused by loss of power supplies, and more than 850,000 homes lost power in the UK at some point. Nuclear power reactors at Dungeness B had to be shut down.
• There was major transport chaos, with 130 flights from Heathrow Airport were cancelled in total, trains services massively scaled down, slowed down for safety reasons or cancelled in the south of England with knock on effects on services further north.  On top of this many roads had to be closed including the A249 Sheppey Crossing whilst channel ferry crossings were cancelled

Responses & Management
The actions of forecasters and authorities limited the impacts of the storm and although causing inconvenience to people kept them away from the damaging effects of the storm. The Met Offices supercomputer worked with a good level of accuracy.
Insurance companies had to take on extra staff to cope.
Estimates of the total costs to the insurance industry of the storm were likely to range between £300 million and £500 million in the UK on 29 October 2013.
A massive effort from the electricity companies meant that by the first of November only 3,110 homes were still without
The Met Office worked closely with utility companies (such as electricity), Government agencies and Transport agencies and companies (road, rail, air and sea) to help them prepare.  They also communicated warnings using social media, apps their website and national news media such as the BBC.

NEXT TOPIC -Evidence for Climate Change